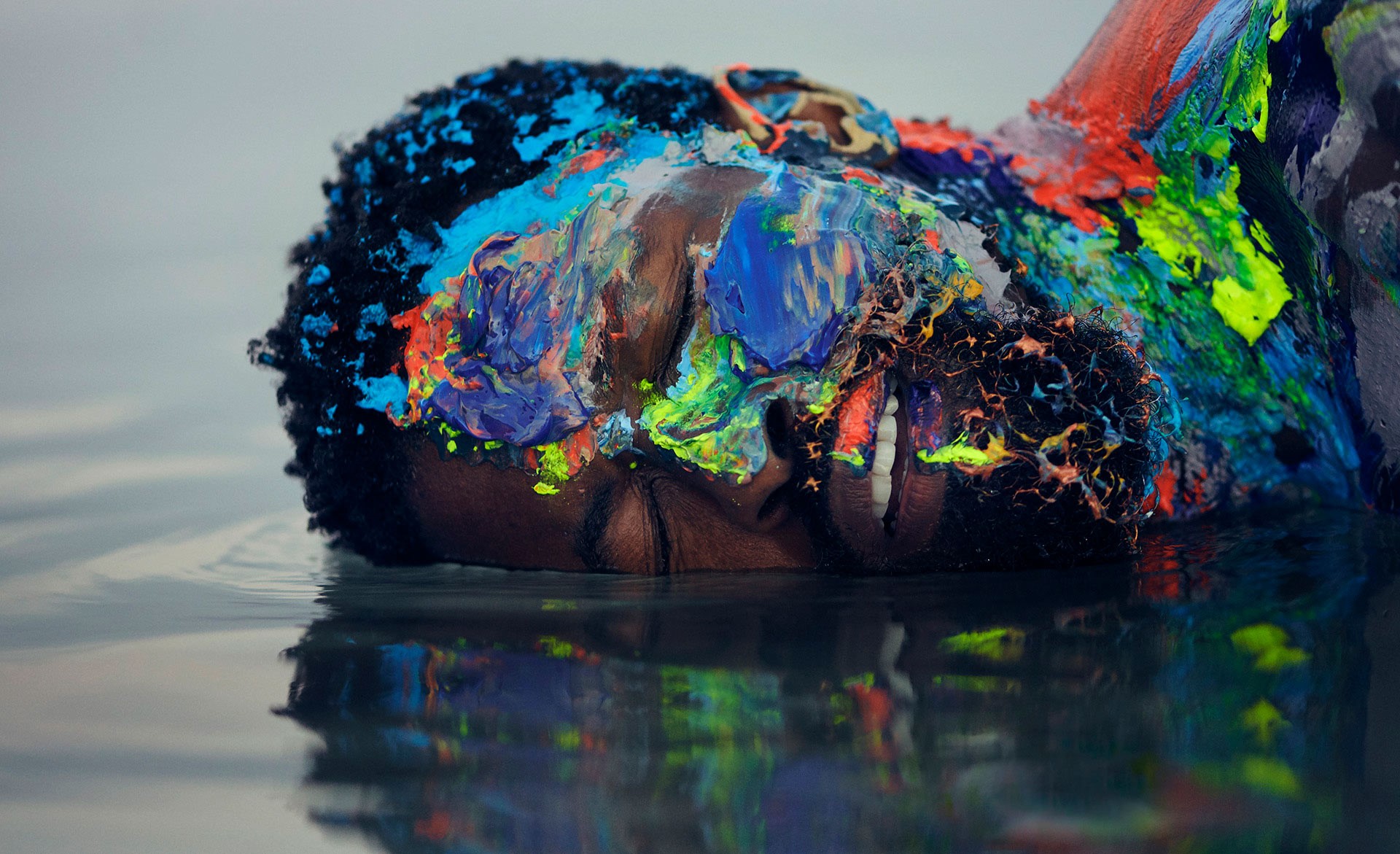 Photographer James Meakin shot this series of photographs of actor Ezra Mabengeza in Gansbaai after a wildfire had torn through the area. It came about through a serendipitous meeting after the two hadn’t seen each other in 15 years. Ezra had just come out of 30 days of shooting the critically acclaimed Sew the Winter to My Skin. James happened upon him in a café in Cape Town and they began talking about an idea he had for a shoot. Listen to the podcast of their interview after the shoot below.

The photographic shoot was shot over a day and a morning. ‘Wandering out into the dark and the fog, we chanced upon two or three amazing locations,’ says James. ‘When the moment’s right, you just jump in and do it.’ For Ezra, it was about role play and the freedom to explore your character when you’re working with someone who has a clear vision. He says to James: ‘I’m almost on a string and you’re pulling the string. It’s not like I’m a puppet, it’s like, no… I’m willingly surrendering myself to this process.’

That same sense of yielding to the creative process occurred during 30 gruelling days of production on the genre-challenging Sew the Winter to My Skin. ‘I’ve never surrendered myself to anything,’ says Ezra. ‘I decided to commit myself wholeheartedly and to experience all the emotions and not to put up a front or put on a mask or a performance that I’ve got it all under control… I just let myself go there. It was such a beautiful experience and it created a beautiful energy in me.’

Mesmerising in its lyrical pacing and lack of dialogue, Sew the Winter to My Skin tells the story of the legendary John Kepe aka the ‘Samson of Boschberg’, a Robin Hood-like outlaw whose infamy rose in the Eastern Cape in the 1950s. Kepe is said to have lived in the Boschberg caves for more than 10 years, stealing sheep, clothes and other items which he would then dole out to the poor community of Somerset East. The film follows the heart-thumping manhunt for Kepe who repeatedly outruns and outsmarts his trackers.

While it did not end up on the shortlist, Sew the Winter to My Skin was South Africa’s submission for the 2019 Oscars. Nonetheless, director Jahmil XT Qubeka’s film has been well received on the international film festival circuit. 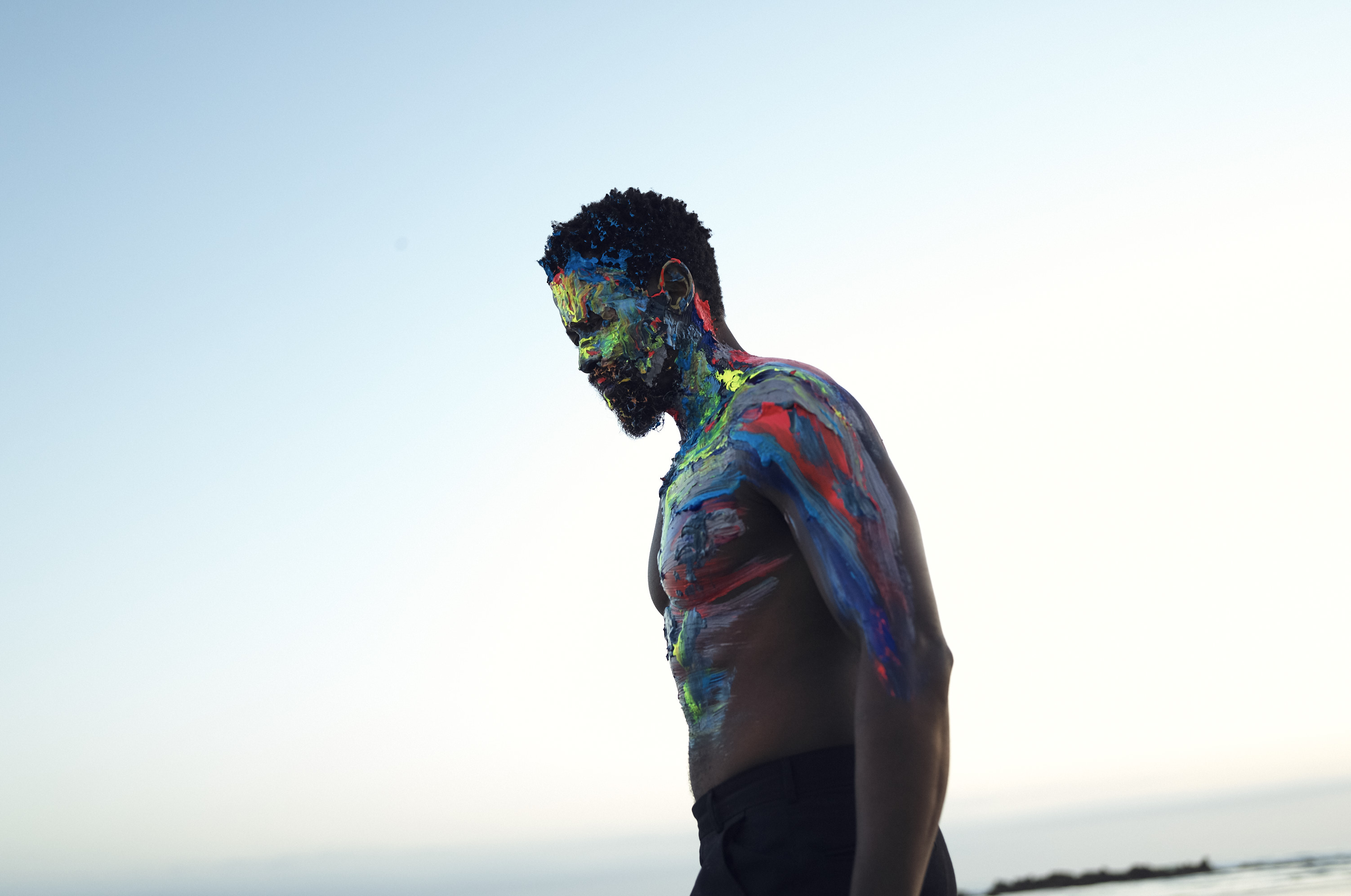 You spoke to James about the challenging physical aspects and transformative nature of this role, which readers can listen to in the podcast. Did you prepare for it emotionally/mentally, as well as physically?

I spoke to the Mpinga clan in spirit and thanked them for the honour since there’s virtually no record of John Kepe’s existence. This is what I felt I needed to do and once contact was made, I asked them what they required of me. They said: ‘just be clean, your vessel must be clean and then we will guide you from within to the man and our nature as oSenzwa’. This meant two years of no sex, no alcohol, and seclusion in Eastern Cape and Cape Town where training began. I ran to my home beach, New Brighton beach. The intensely beautiful thing about this beach is that it was a designated beach for blacks during the apartheid years. Nothing at all has changed. It used to have this incredible smell there and still does due to carbon black factory on one side, which has covered all the vegetation in sticky black goo, and sewerage works on the other side. This smell instantaneously put me into an apartheid frame of mind. I did beach sprints and lots of stretching and cardio and callisthenics on the metal bars, as well as the ones in Sea Point in Cape Town where the promenade has the exact opposite aesthetic – fresh air and beauty – and that contrast, between New Brighton beach and Sea Point promenade, gave me an inner ‘boiling of my blood’ naturally.

In terms of your portrayal, can you give us insight into the psyche of John Kepe as a ‘wild man’?

He is a fun guy who always had a smile on his face, he’s mischievous, but ‘akaqelwa ikaka’…  I don’t really know how to translate that in English. If you double cross him, he’ll never forget – there will be spiritual retribution. He’s not at all concerned about the physical… his ancestors will get you plain and simple. He’s also very focused, so once his mind was made up, he did it. As he did, I ran on that mountain with sharp-edged rocks and thorns, spiky vegetation and a whole sheep on my back. He never felt pain, his body was made of steel. His spirit lives on and the mere fact that we did this film confirms his spirit is still alive and I embodied it, and now it has returned to that mountain kwaNojoli. We shared way too much in common me and him… I guess that’s why I was chosen to play the role.

A Western epic for the ages.

Any special new projects on the go?

The contractual nature of the film industry doesn’t permit me to talk about that, but I’m working on films shooting in Australia, Helsinki and Nairobi. And I’m busy learning French, German and Swahili.

Where can people see Sew the Winter to My Skin, locally or internationally?

It will be on DSTV locally and it’s still doing well on the festival circuit overseas. 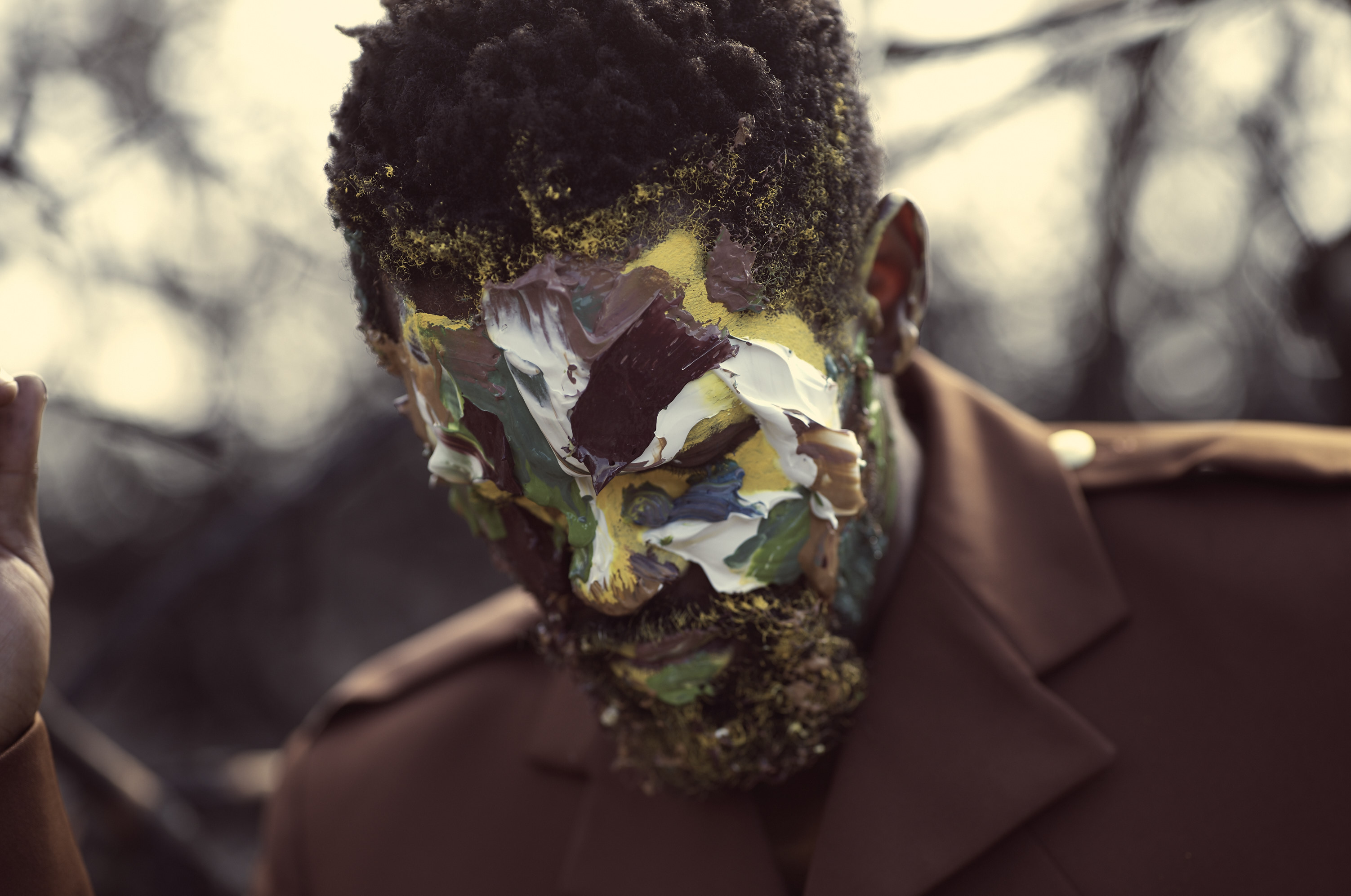 Using the human form as a canvas is so evocative, like a moving/changing/adapting art form and your photographs capture just one beautiful moment of your art in movement. How do you approach each of your subjects and specifically, how did you approach Ezra and the character he was creating?

As with most of my other subjects, I hoped to learn as much as I could of Ezra’s character before the shoot, but as he is so mysterious and perhaps as he was already in character, I had to feel my way through to see who he would choose to channel. I wasn’t sure if he would be himself, the outlaw John Kebe, whom he portrays so brilliantly in the film, or someone else. I started bright as usual. Vivid. Blue. Vast. Contrasts of neon orange. Then I reworked my palette to hues of green and retro colours which seemed to bring up nostalgia. The styling and location also influenced me and I loved seeing his character unfold. I, as everyone else, seemed to also simply observe the process and it is fun to watch it unfold and come to life. Just like a real painting. It was great waking up to the misty weather and reinventing the palette to compliment the styling. 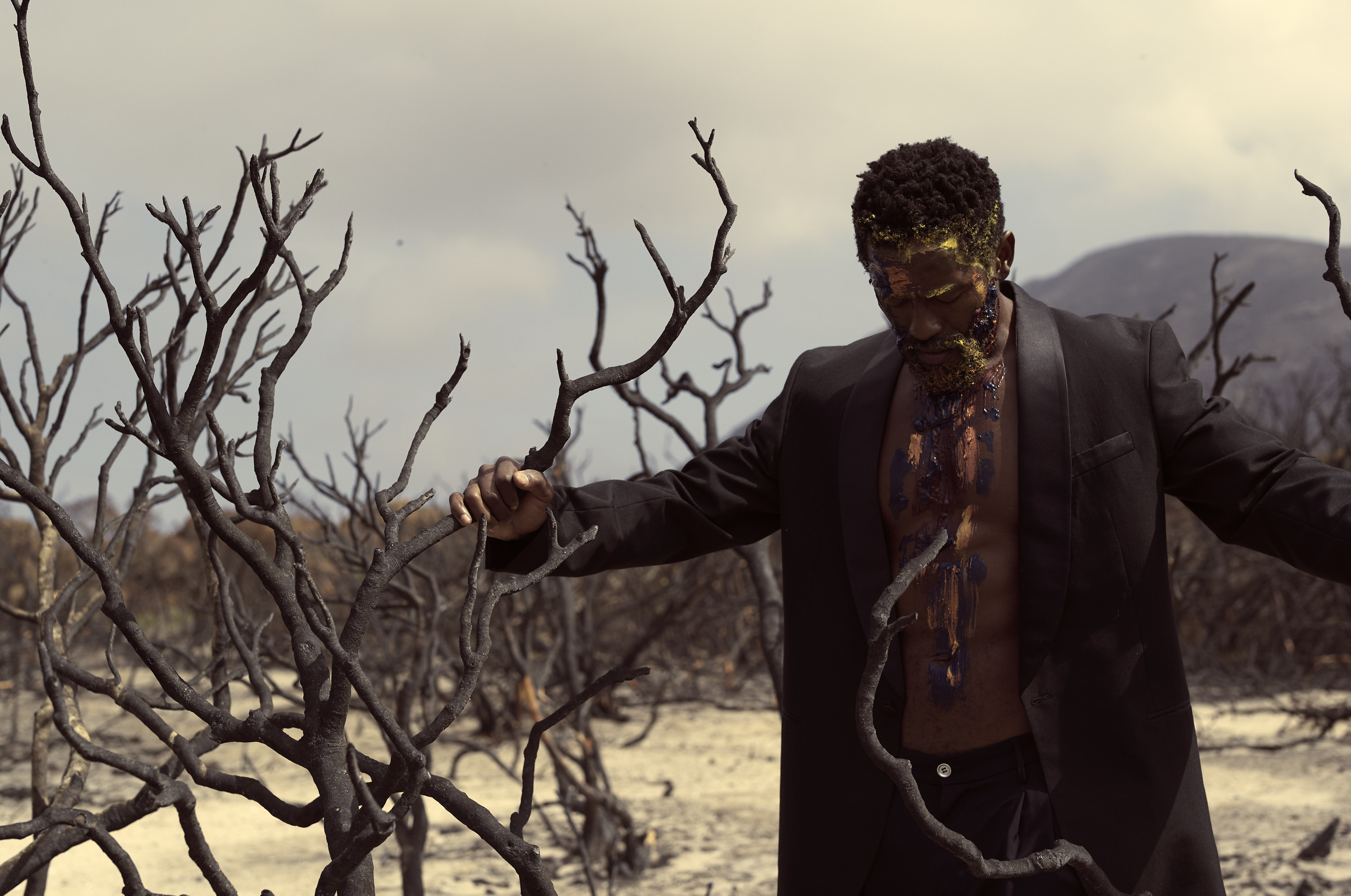 In the viewer’s eye, it seems like this art has infinite possibility and the imagination is captured not only by what’s in front of their eyes, but by what the work could transform into. It makes one think about the past and the future, as well as the present. In this way, it was the perfect expression in terms of Ezra’s character in the film Sew Winter to Your Skin. We are constantly thinking about who this man is, where he came from and where he’s going. How did you evolve into using this particular art form?

Exactly. The movie certainly makes you wonder about the man. But the real-life man intrigues one just the same. I met Ezra many years ago and he is certainly not bland of colour. I spent many years in front of the camera as a model. I also photographed everything in those years and I painted and drew often. I love art. I decided to merge all the knowledge I had of these three mediums which I already found very familiar.

In general, I try to channel an archetype or the essence of my subject. I want to know their spirit. Their favourite story. Something which matters to them. Sometimes they tell me and sometimes I have to feel my way through. Since they may at times be unrecognisable under the paint, I hope to bring out their true colours one could say. These contemplations make it fun for me and I love coming to a vivid picture in my mind of the portrait I hope to create and then I set out to make it just so.

What type of paint do you use and how does the process of creating work for you? Also, what do you love about the mediums you use and the way in which you use them together?

I use safe paint, make up, food colouring and really any safe medium to help create an impasto look. Each shoot is different but I generally try to use many different layers through painting, drawing, styling and finally, photographing my subjects. Anything to bring out the deeper message. My aim is to make it look like a living painting.

In this story, I really enjoyed the challenge of passing control and trust over to James to take the pictures. I know James and his work and even though I was never quite ready, I knew I was in safe hands. Although I was almost a bit unhinged with the freedom to, for once, just focus on the process of painting. Ezra moved and engaged in the elements, while James beautifully captured everything. Effortlessly. New angles. New movements. It was in fact really freeing for me as normally I try to control everything at once which is in itself a great challenge.

It was beautiful to run into the dew of a misty, moody morning; into the fire-ravaged vegetation and dunes; and to rework my palette to more diverse hues of nature. The fluidity and transformation any sitting can go through is what makes it exciting for me. It goes quite fast since I don’t like the paint drying much at all. I love the fact that one needs to check and check again. That it’s a person and a picture yet a painting at the same time. This time the elements merged and became really alive with this brilliant team. Just the way I like it. 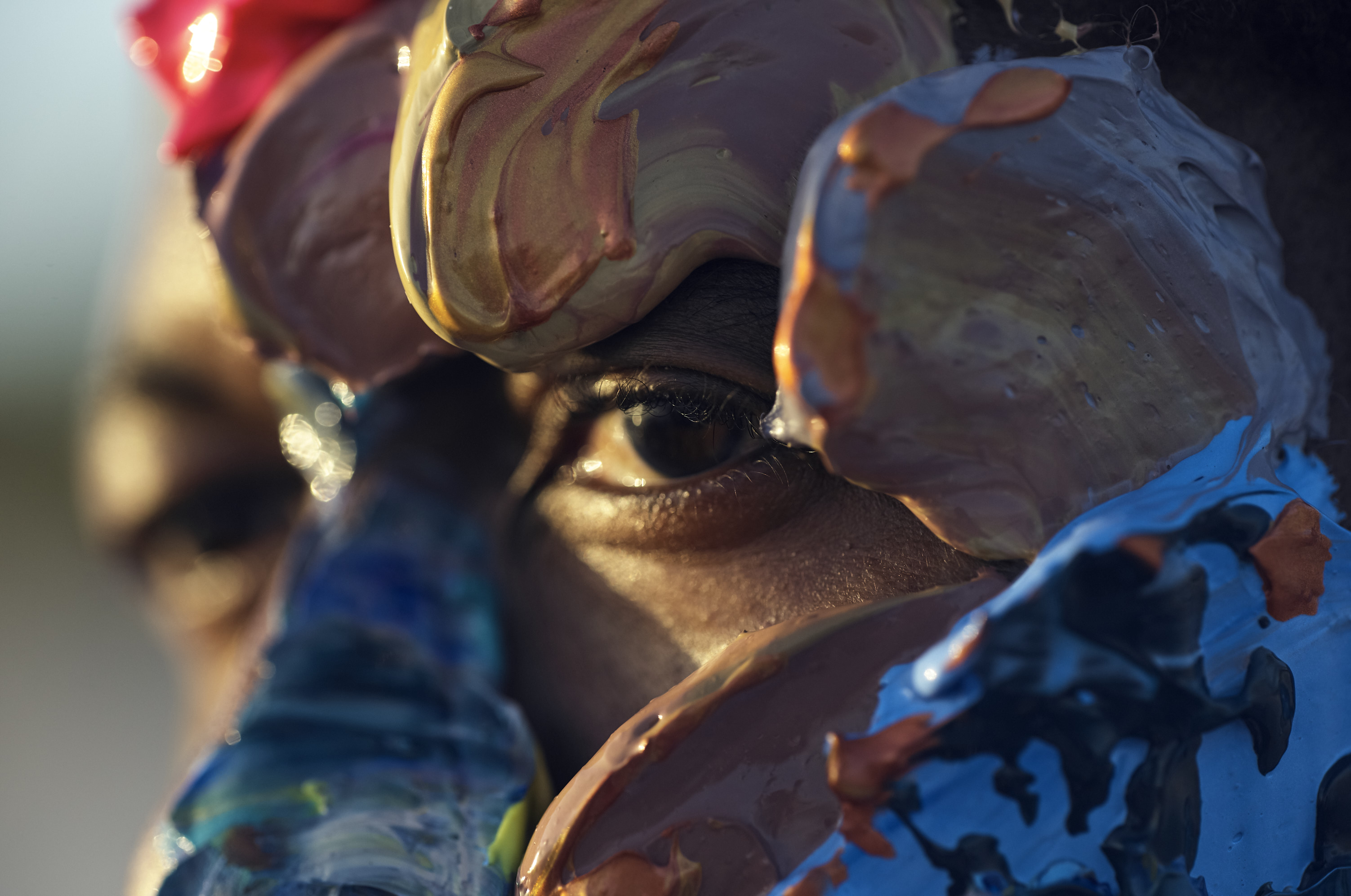