Tsoku Maela is a visual artist hailing from the Lebowakgomo municipality in Limpopo. “An archivist of a future African past in the present time”, Tsoku’s work is an amalgamation of our past, present and future struggles resulting in a visual language that is so vivid it evokes our inherent desire for liberation. Tsoku took some time out of his busy schedule to talk to AFRICA IS NOW about Afrofuturism, mental well-being and his series titled Book Of Maskuline. 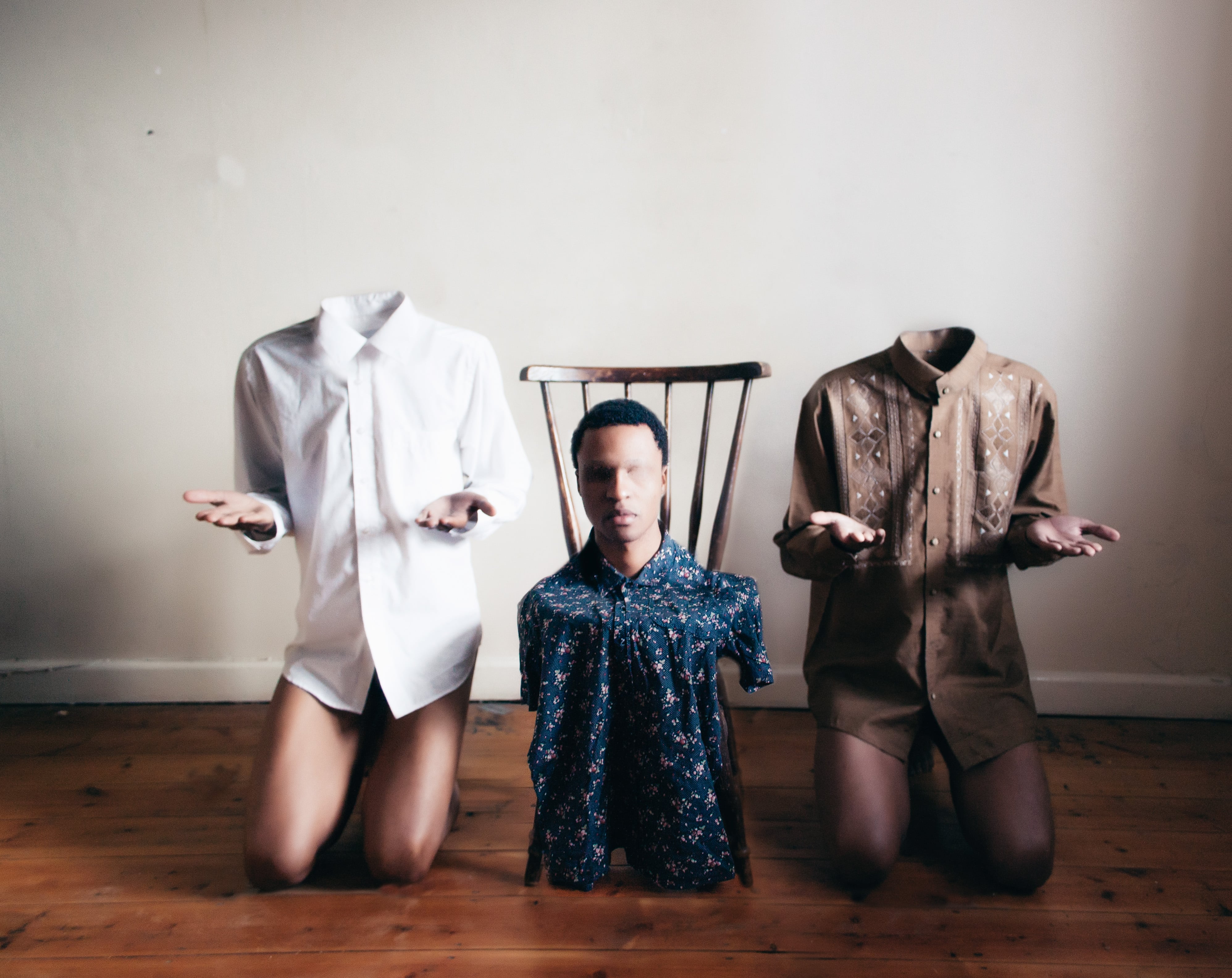 When I was apart 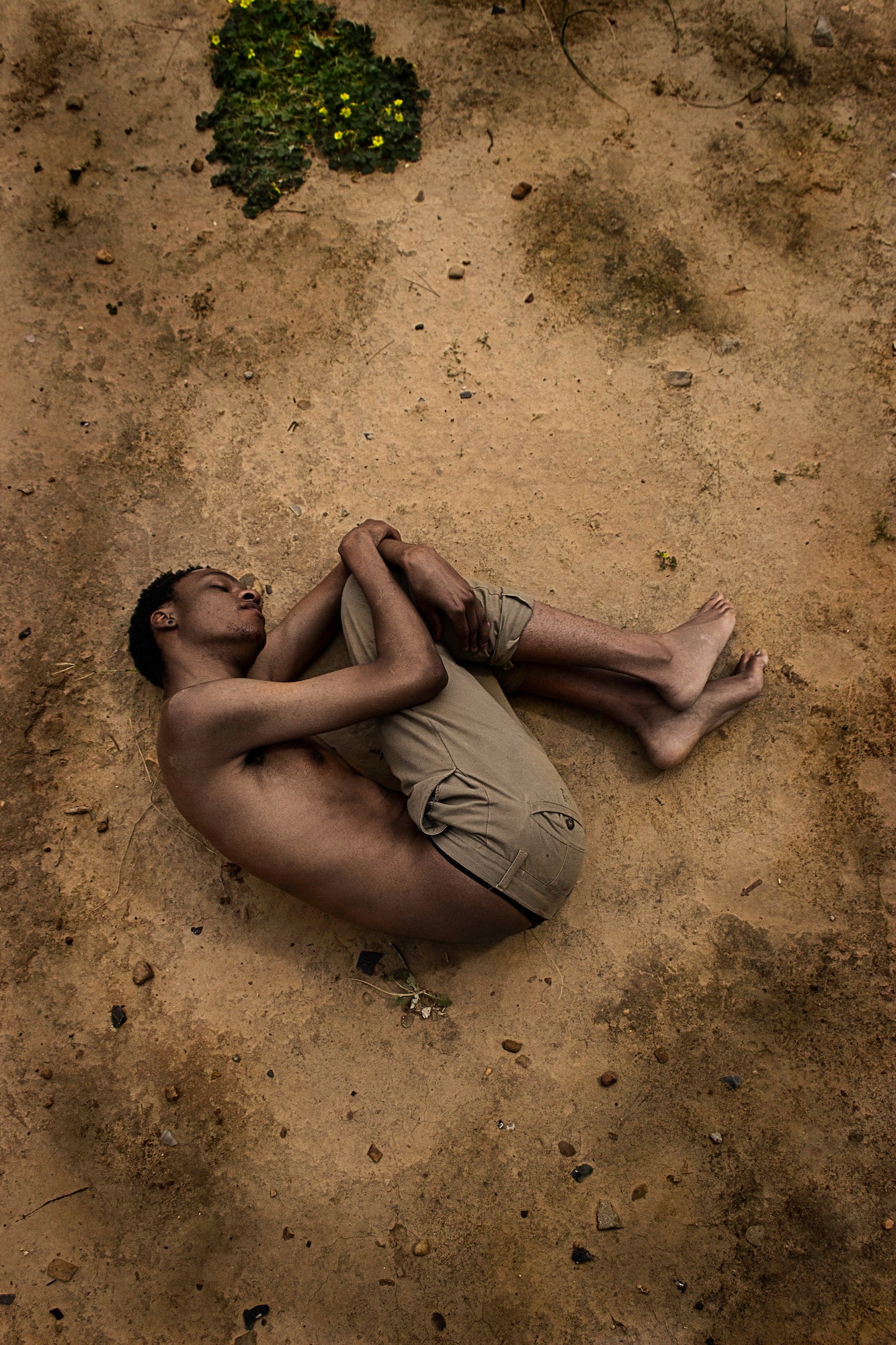 What prompted you to pick up a camera and experiment with photography?

Life. And at that time a confusing and miserable one. I was looking for a way out of myself and the only thing I had was a camera that I hadn’t used in 3 years or so. It was a moment when my quiet desperation to live and to live beautifully came into contact with the dying embers of my soul. I just wanted to see them for myself. So I used what I had, which was a bedroom in Woodstock, a window for lighting, an entry-level camera plus kit lens, and a stack of books for a tripod. For the first time in my life, I felt completely free and realized the value of life regardless of my circumstances.

Your work tends to focus on Afrofuturism and this vision of our future society, why is this important for you?

Most of the art we consume as South Africans is political art that focuses on colonial history and the black body within it. While this archiving of history makes sense given our relatively young democracy, it offers us no solutions. The role of Afrofuturism isn’t to introduce an aesthetic that looks African but to tap into the power of African collective memory by creating references we can use to re-imagine the African narrative. To cure the ills that plague the African psyche. And there is a lot we need to get through in our PTSD. But we must not lose sight of the power to choose who we become tomorrow and it all begins today. So I’d like to create an archive that appeases the idea. 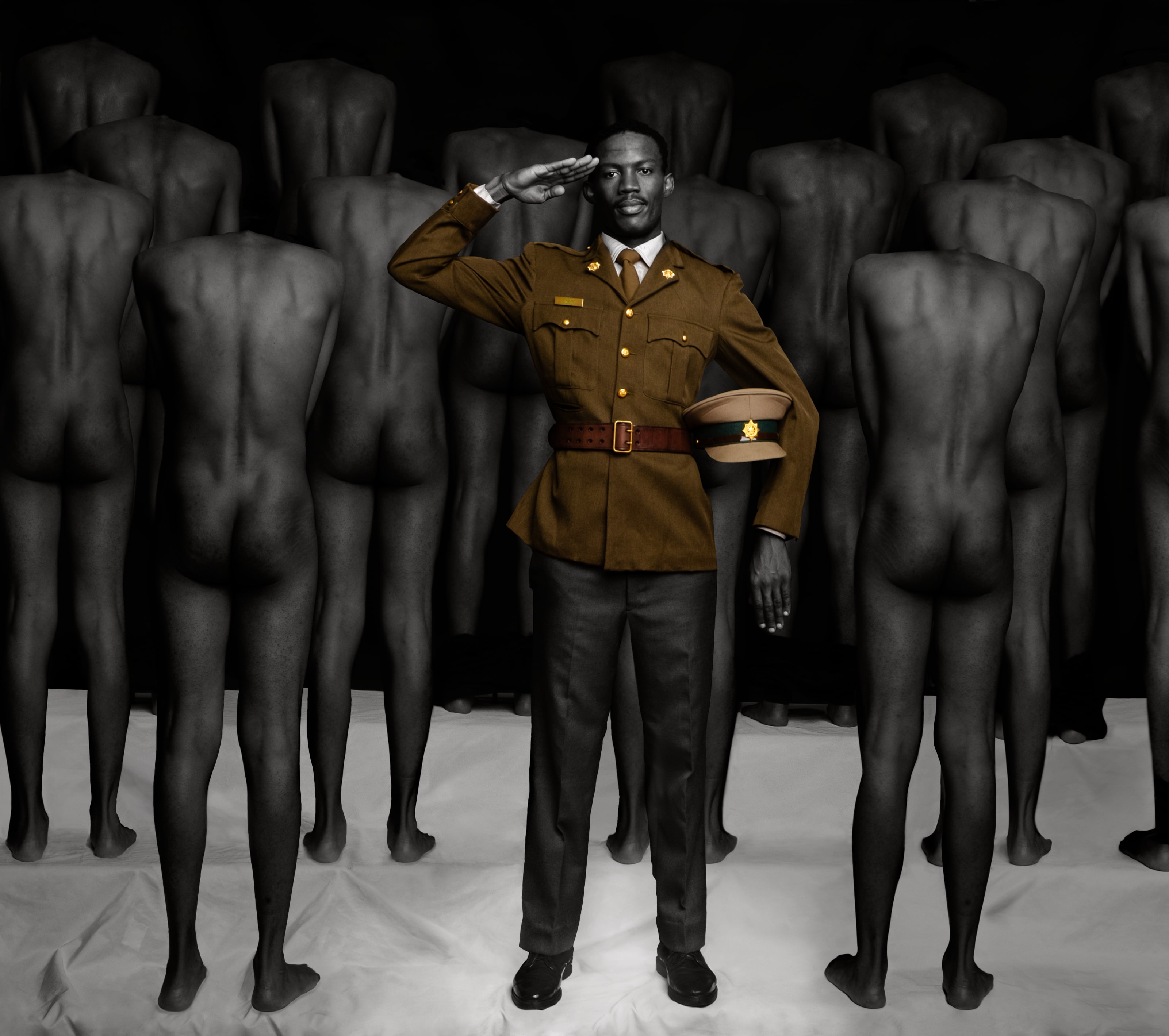 Mental health in Africa. We as Africans have faced and are still facing so much adversity, what do you think can be attributed to the misunderstanding and misrepresentation of mental health issues in African communities?

It’s a myriad of reasons but one of the most common influences is the remnants of a colonial machine. When we take a closer look at colonialism we realize that one of its many functions is to stunt the culture of the oppressed. And one of the aspects of a community that suffers from a stagnant culture is its language as time moves on and technology evolves. Afrikaans people in SA have Stellenbosch University where Science can be taught in their language. So it comes as no surprise that they have a word for depression: “depressie”.
I am aware and have been made aware during several talks of the stigmas that exist surrounding mental illnesses in white communities, but at least there is a language and structures to handle it. With Africans, the stigmas, or misunderstandings as you place them, exist because we don’t have a language for it. There is no empathy for it. When you place that understanding within the context of the generational mental suffering endured during Apartheid or slavery and the need to be resilient to survive, the acceptance of pain and punishment as a way of life, you quickly see why Africans refuse to accept that they are “crazy”. We would rather say we are bewitched.

It’s heartening to see somebody, particularly an African man, explore depression publicly. What do you see as the value or risk of doing that?

Well, the risk was always that my family would become implicated in the community they live in. I am black, speaking of having a mental illness. The stigmas apply to me, too. But based on conversations and e-mails I’ve received from black people across the world, I think it’s very important that this was and continues to be spoken about. You see, depression and anxiety are the zeitgeist of our time, but these conversations open up a whole new world of mental illnesses, like schizophrenia and addiction. Which African people do suffer from. It also opens up our understanding of the differences between “mental health” and “mental illness”. Which in turn promotes conversations about our past, about trauma in our families and lineages. 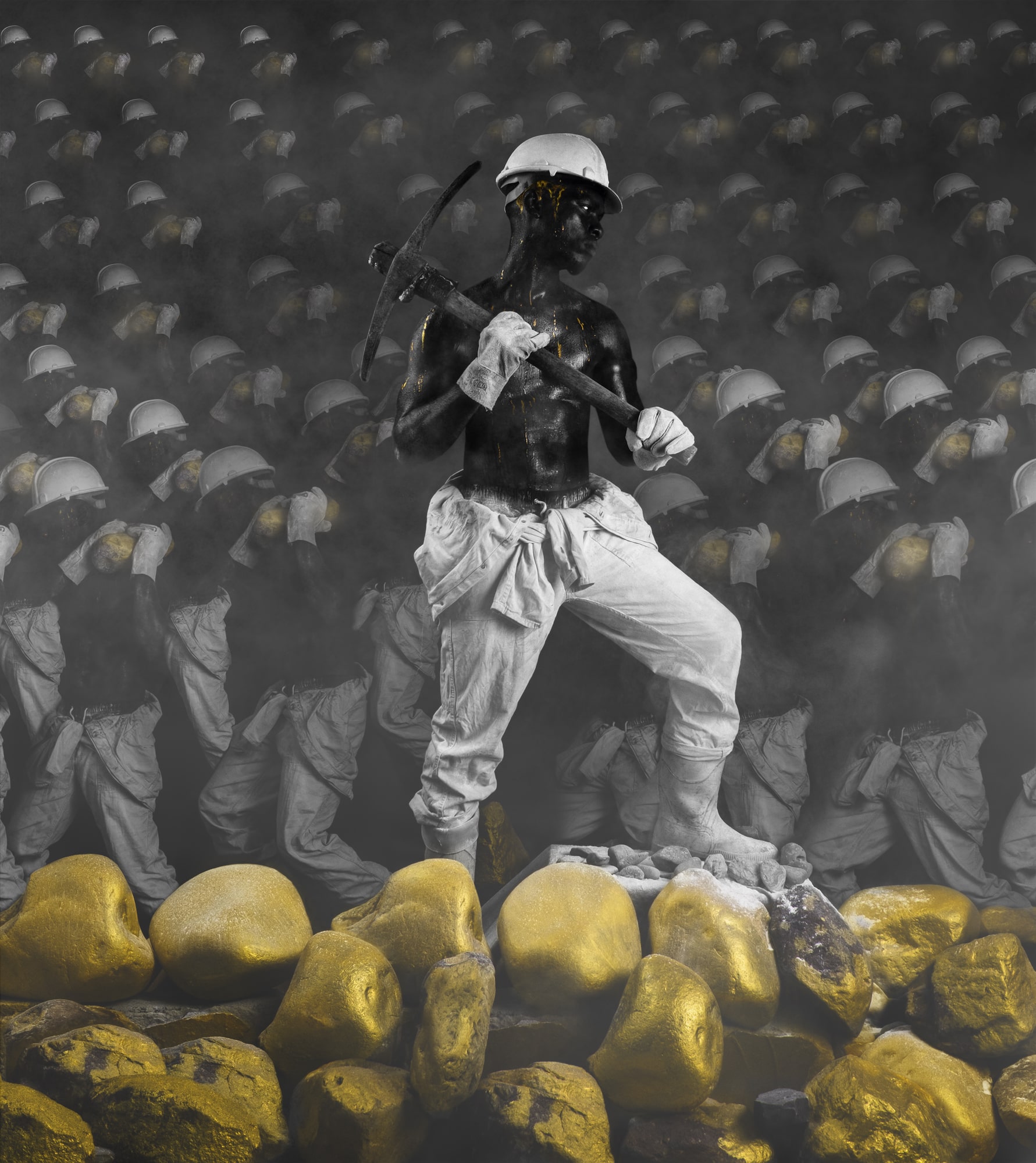 WHATS URS IS MINE 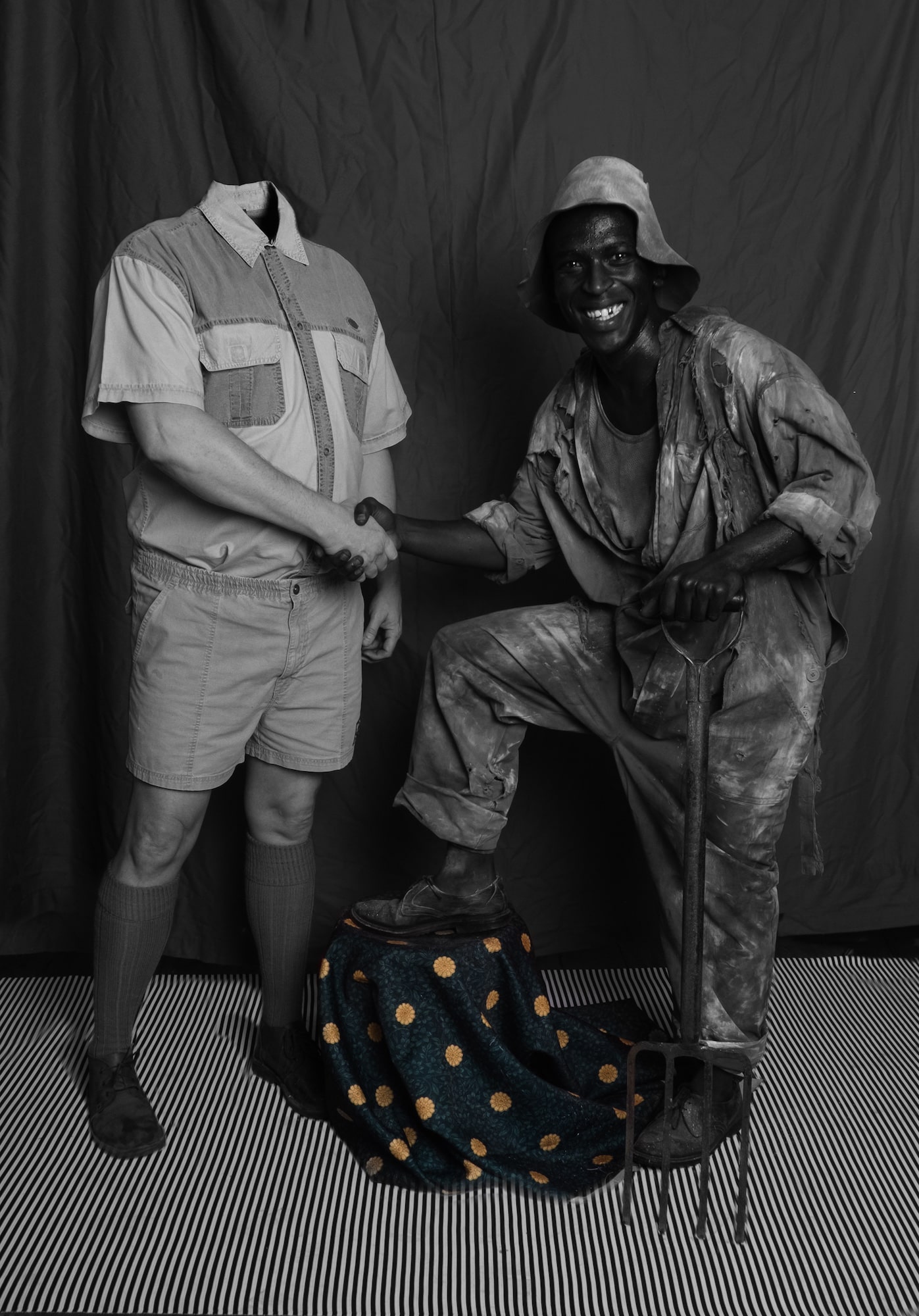 A lot of African cultures incorporate highly misogynistic traditions, how does one begin to break down the walls built by toxic masculinity without losing one’s ‘roots’?

When I walk down the street and see another male, regardless of race, I know nothing about them for sure. Except that we have both been victims of patriarchy.
Misogyny and toxic masculinity are by-products of a bigger and more nuanced cultural issue that is Patriarchy. When people talk of patriarchy today they think “Anti-feminism”, but that is giving patriarchy a huge slap on the wrist because patriarchy is “Anti-Human” and “Anti-Life”. It taps into the masculine energy in little boys and mutes their femininity through cultural institutions that portray it as weak. So, I do not think this is inherently an African issue in terms of culture, it just a cultural issue for all of us living or adopting western values. Neo-liberal capitalism being one of them, which is another institution that requires complete loyalty to Patriarchy. If I was to write a book on how to become a CEO, essentially I’d be writing about patriarchy and toxic masculinity. We need to instill a culture of transparency in our boys and the same in our men. We have to create those spaces for ourselves, too. Where we can talk freely about how we feel so we can heal. If not, I am afraid we will continue killing our environment and killing our women. It’s called the frustration-aggression theory for a reason and it’s very applicable here.

Why do you think your work resonates with so many people?

I don’t know. But I imagine it’s what it feels like to think you’re completely weird and then bumping into someone even as weird and thinking “Oh my god. He is so chill about being weird. Maybe, like, we’re not weird and everyone else is. Is that weird?” 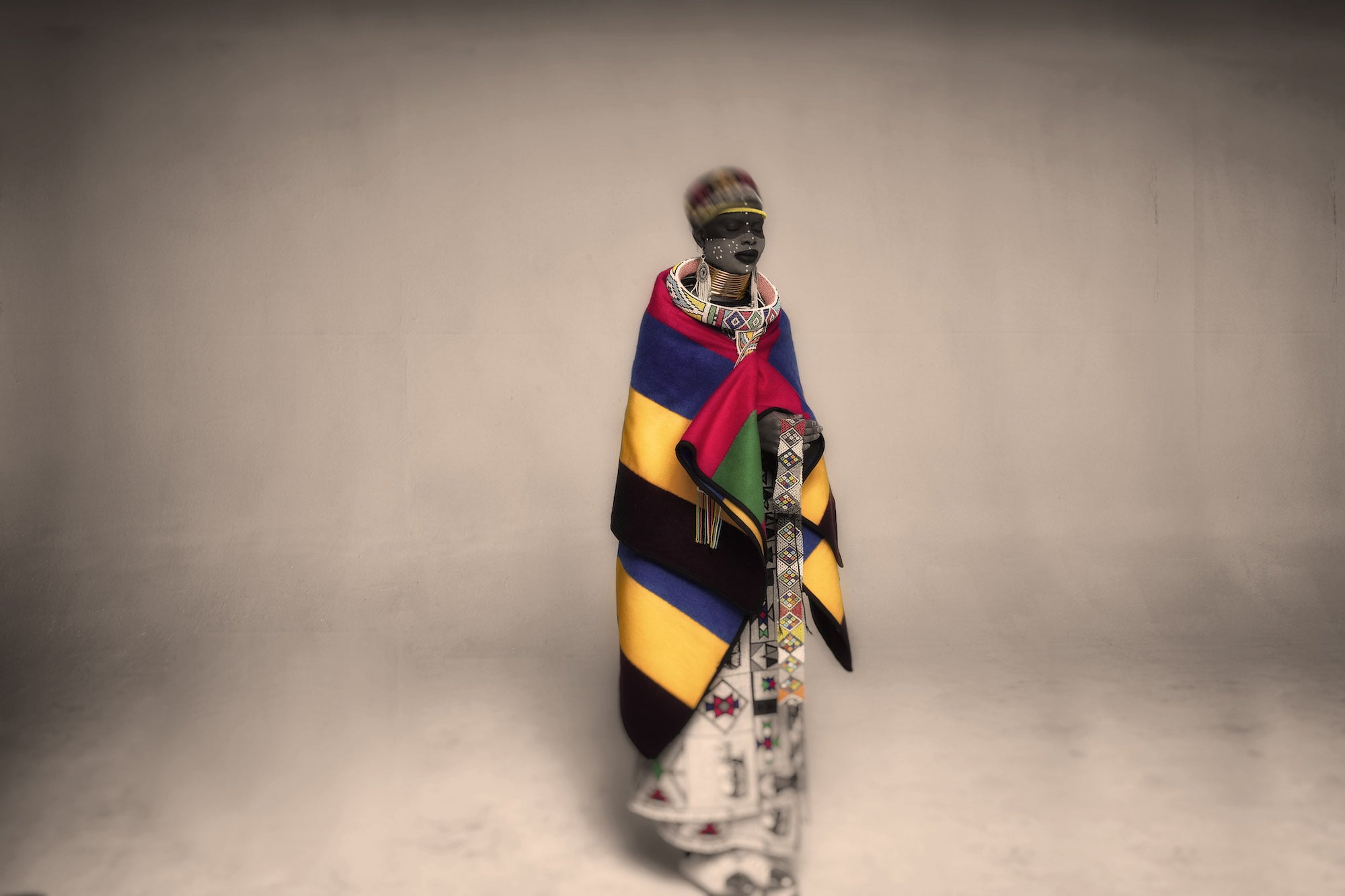 You’re a photographer, director and writer. Which is harder? Telling a story in one single frame or multiple frames?

Technically it’s harder to tell a whole story in a single frame, but my brain just gets it. So this answer may be flipped the other way around for others, but for me, it’s harder to tell a story in moving pictures. I overthink it sometimes because you have more room to work with. I prefer to create a room within confines and discover what stories lay hidden in the spaces I work in.

When people look at your work, what feelings and thoughts would you like to provoke in them?

I don’t think about that at all. For me it’s never about the work, but the process of making it. It’s a process that allows you to go within yourself beyond the physical state. Beyond your own memories. So, I suppose if I was to ever have hope for a feeling in another person it would that transcendent experience. For them to question everything. 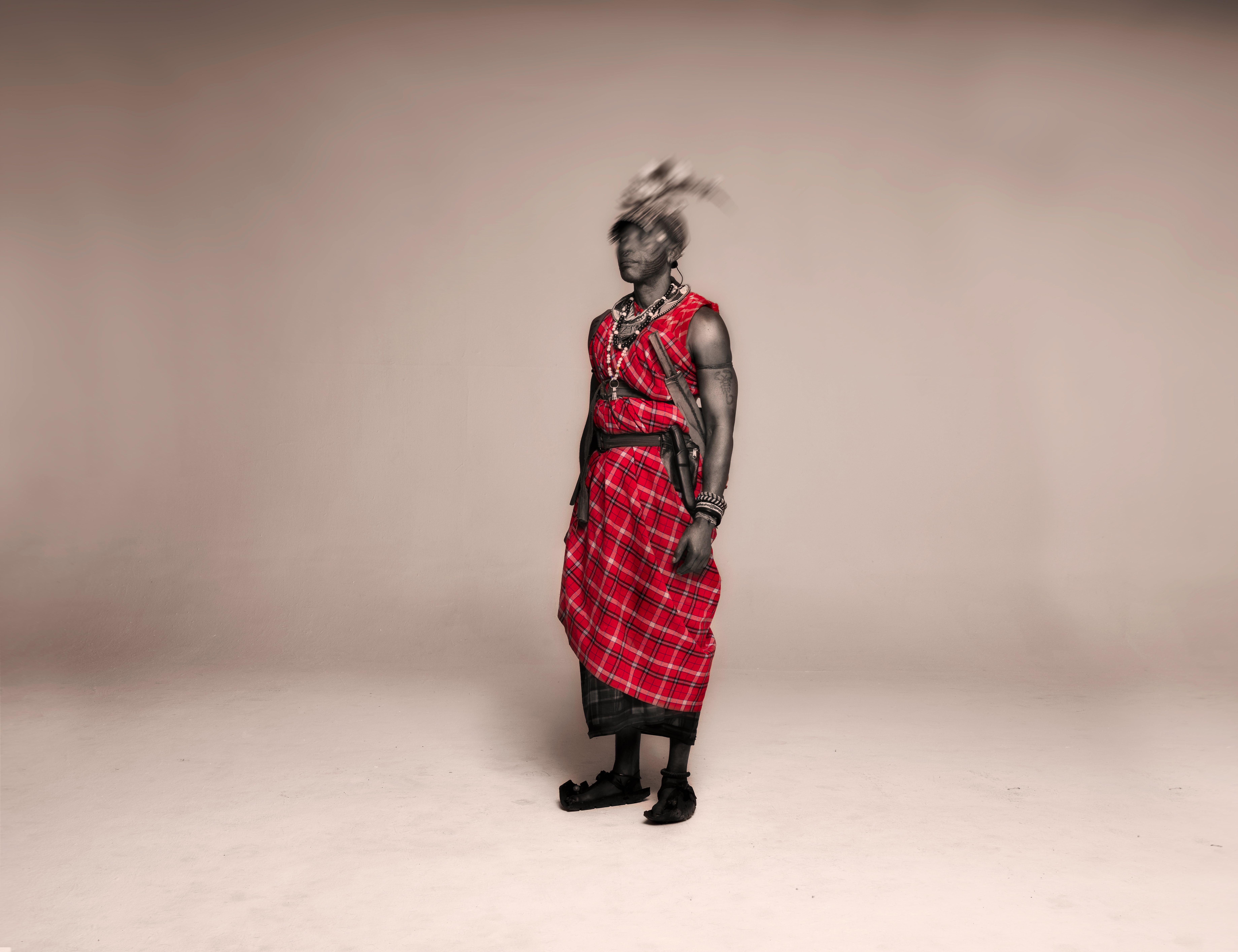 Tell us about the image below from your series titled Book Of Maskuline. 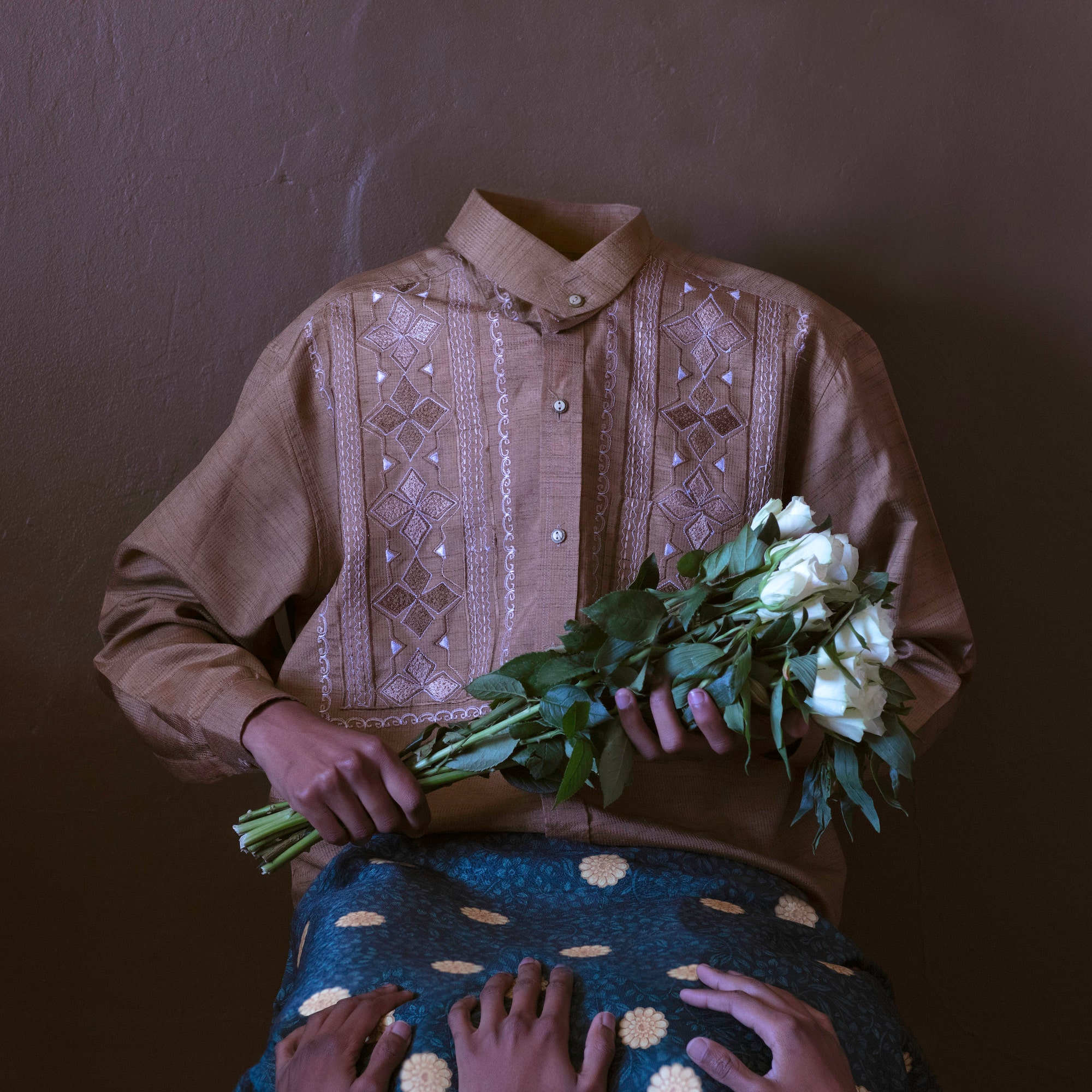 At my own knees and feet: God the self

Book of Maskuline explores masculinity as a religion and juxtaposes the role of God as the Father figure in a home and Jesus the unquestioning son on a quest to fulfill his Father’s wishes. One of the verses in this book of maskuline reads as follows:

“We are constantly confronted by three versions of self:
Who we are.
Who we think we are.
Who the world thinks we are.
If you can, choose the first of the three”

The key phrase here is “if you can” because we tend to conflate the three to be one. We can quite easily become who we think we are. Most people on our planet, actually, are stuck in that realm. “As a man thinketh…”. Most of us unfortunately also become products of our environments and external opinions. Very few of us have the time or space to go deep within themselves to at least find out who this ever-evolving creation is and why it is said they are made in the image of God. In the context of the series, by choosing who you are, you realize that the message of God isn’t that you should serve this external God all your life, but that you should find God within yourself and serve that. With great power comes great responsibility, though. 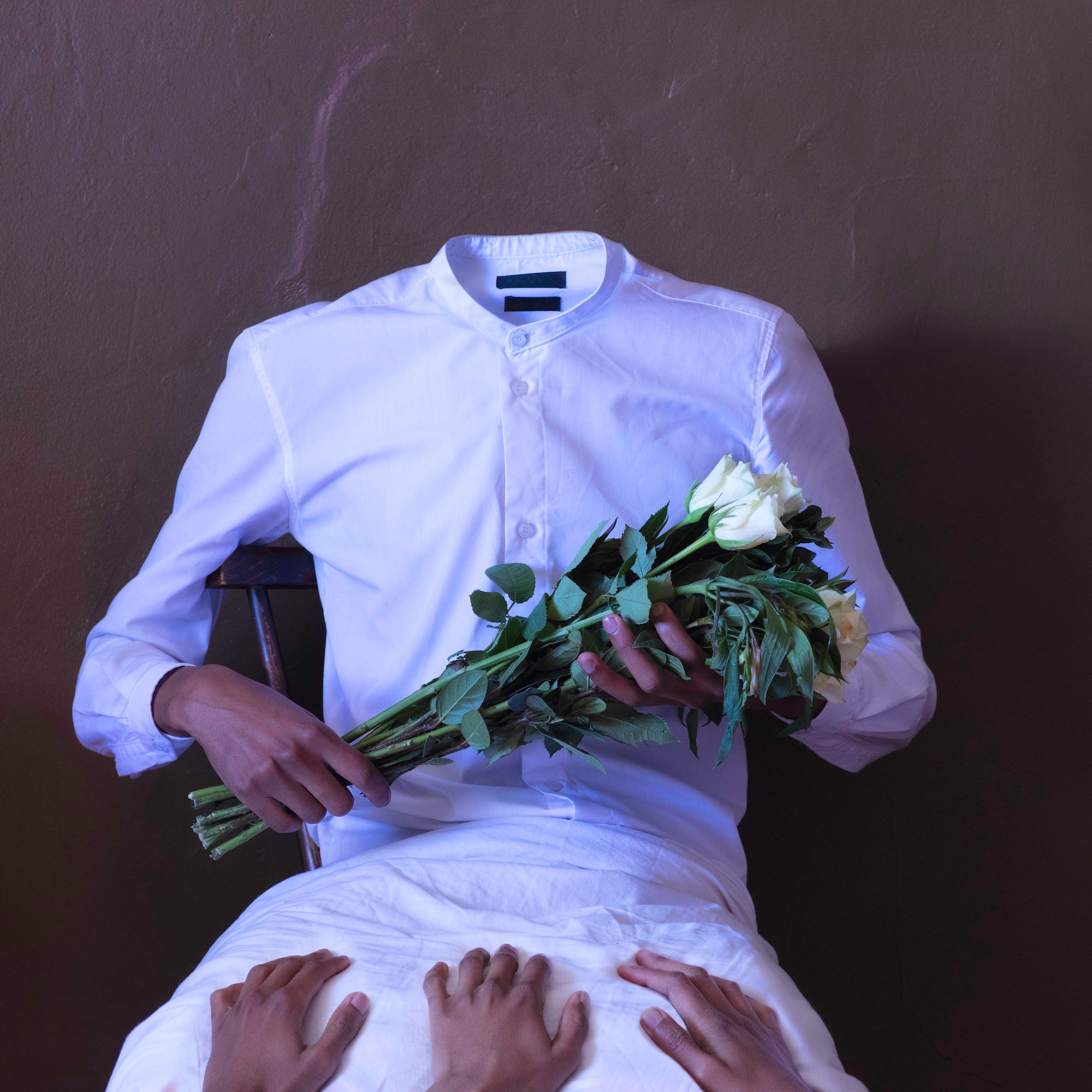 At my own knees and feet (reprise): False Gods

What are you looking forward to the most next year?

This year has been an absolute blast and I am grateful that most of it had to do with the art functioning outside of the art world. I have met many incredible people doing incredible things for other people and our planet. So, you know, more of the same please. More growth and compassion and hopefully there will more art to talk about. Who knows. 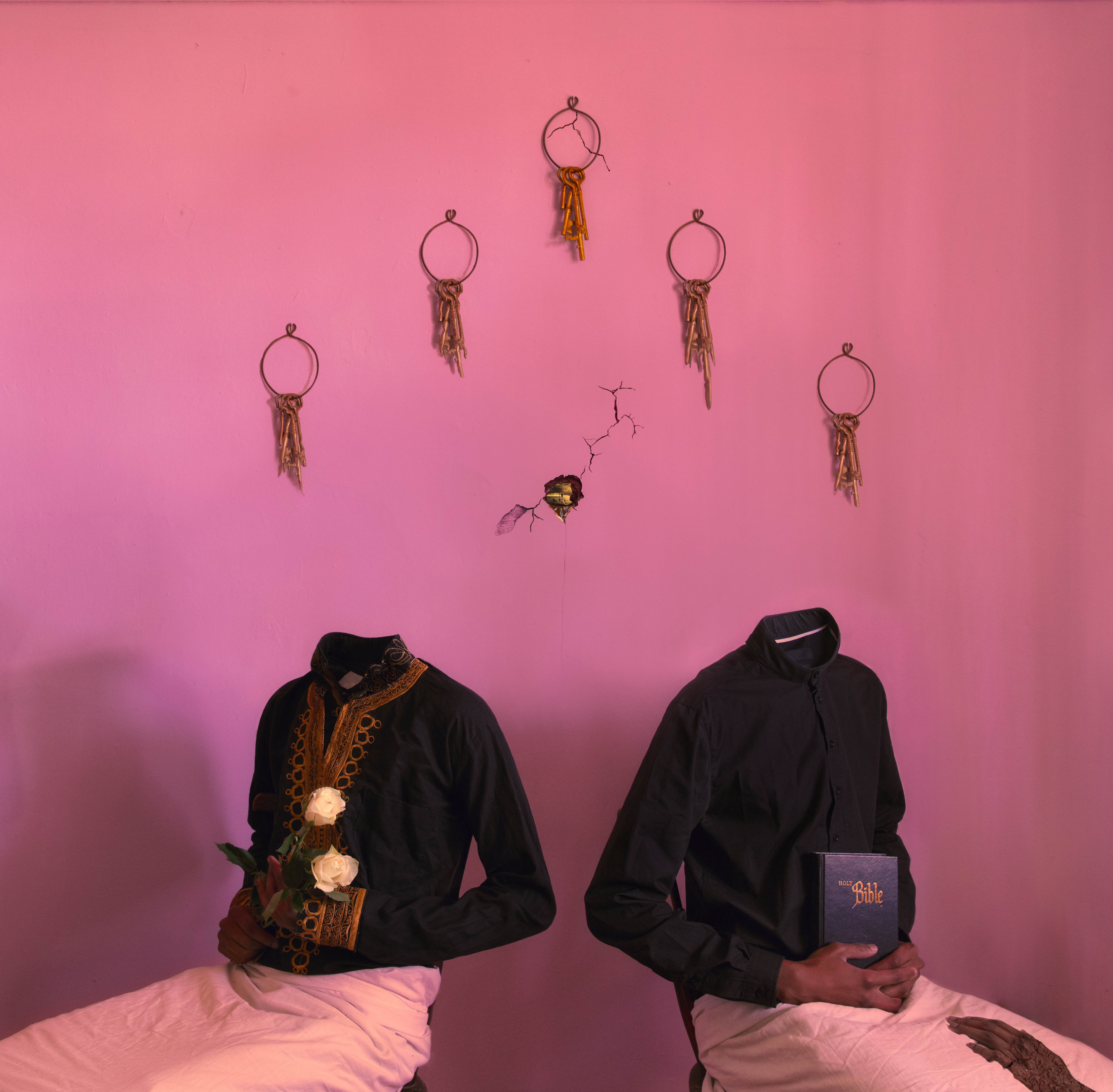 Sins of the Father

Catch Tsoku Maela and others at the Investec Cape Town Art Fair 2020.